Behind the scenes: Visualizing the conversation around the #WorldCup

Yesterday we released an article showing Twitter data about the global conversation around the World Cup. The main piece consisted on a data visualization showing how each country mentioned the national teams.

This is a behind the scenes on this work. I will show how we got to design the visualizations and interactions we came up with for the project and also I’ll cover some interesting insights taken from the data visualization.

So first things first, if you haven’t yet please go on, have a look! 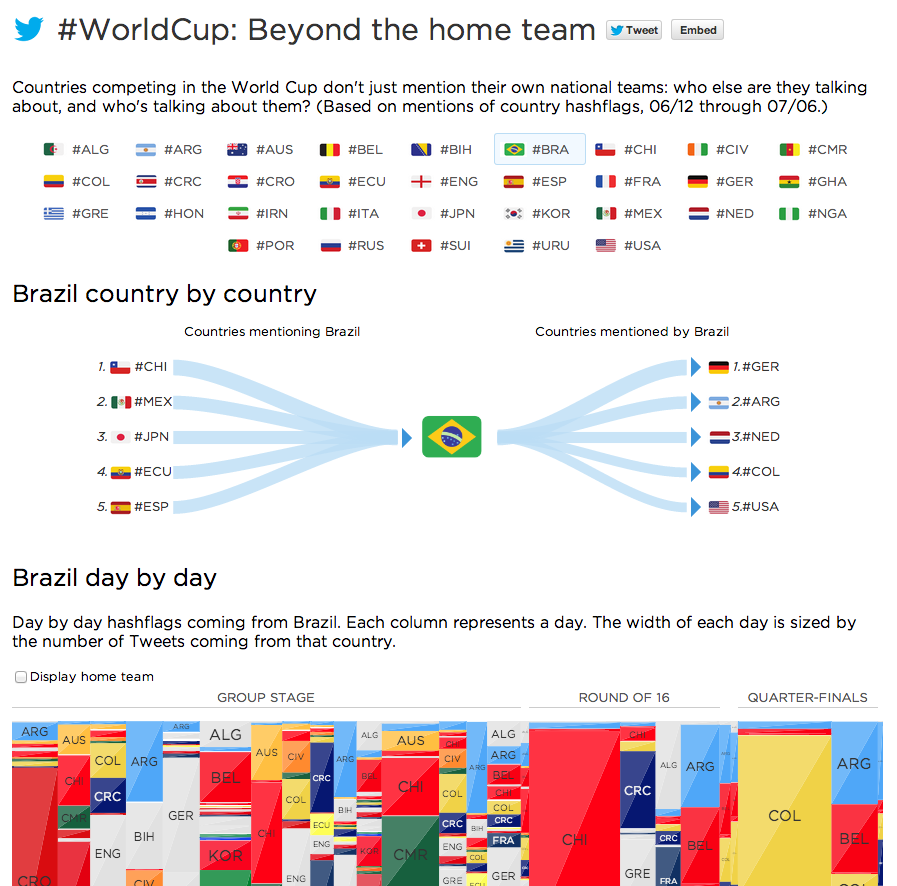 The visualization has two main parts. The top one lets you select a country that participated in the World Cup and for that country one can see things such as:

This was done by analyzing hashflag mentions in Tweets.

We went through a few iterations for the top visualization:

The first take we had on it merged both the menu and the graph in one single graphic:

To enforce the notion of directionality we implemented the tapered representation recommended in Holten and van Wijk paper.

However, after some user testing we found out that although the visualization combined both the menu interaction and the mentions data in a compact way, it was confusing for people. The directionality was not clear and also it wasn’t clear that the labels were also used as controls to select a country.

These two bar charts convey almost the same information than the first design. The main differences are that we only select the top 4 countries on each side of the list, and also that we decide to add percentages to show how often mentions of and mentions by happened.

This design also forced us to separate the interaction part from the visualization. We created a separate menu listing all hashflags:

Paradoxically we found that this design was in a way worse: although it looked simple, it now consisted of two disconnected parts and it was hard to visualize the flow of mentions by/of.

After more user testing and gathering feedback from our team we came up with the third design. This one still focused on “low entropy” but also included the notion of directionality we had on the first design. It shows almost the same information than the first one, but needed less text and less explanation time to be understood by our test users.

A few interesting insights emerge from this visualization:

For Brazil, its team was widely discussed among football fans in Chile and Mexico, while Brazilians were paying a lot of attention to semifinal opponent Germany, archrivals Argentina, and fellow semifinalists Netherlands:

For France it’s interesting to see some of the immigration patterns. The most mentioned hashflag from France is #ALG. Top countries mentioning #FRA are french speaking countries and ex-colonies:

For the US the most mentioned hashflag is #MEX (for Mexico).

Some other connections can be geographical, like Bosnia and Herzegovina and Croatia mentioning each other:

For Argentina, it’s interesting to see that besides Brazil the main mentioned country is Colombia. The Argentine coach Pekerman was the coach for the Colombian team this year.

The viz is a bit harder to read, but there is a rationale behind the design choices for it.

Each column represents a day, and the width of each column is sized according to the volume of Tweets with hashflags sent from that country on the given day. Inside each column we have the relative distribution of hashflag mentions during that day. Here’s an example for Argentina: 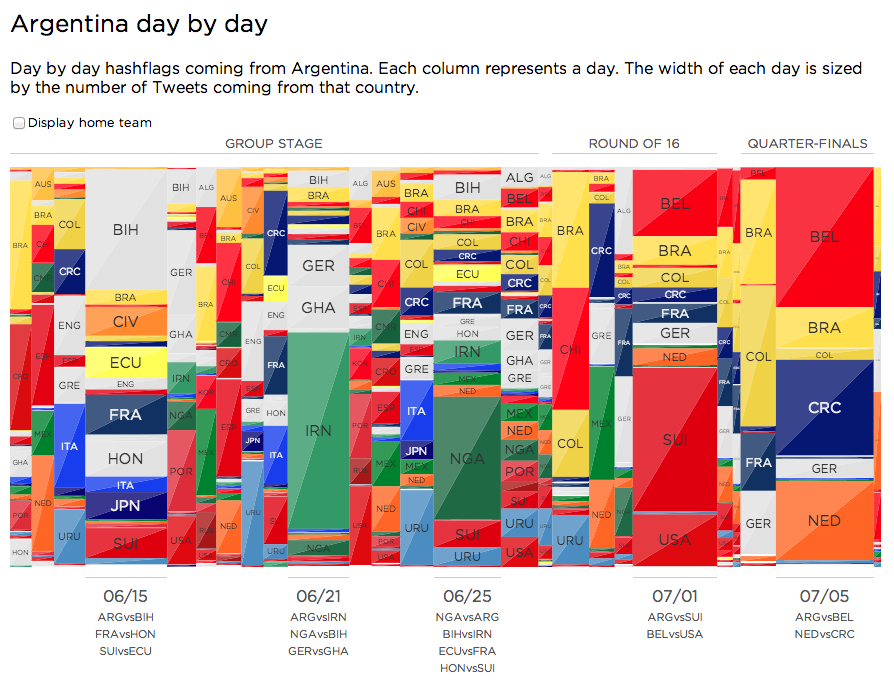 The most challenging feature to grasp might be the width encoding for each day. Why not just create a stacked bar chart and use the (cumulative) height of each bar to represent the amount of Tweets for each day? This would be the result for Argentina:

To get our visualization the first step is to get rid of the height encoding for the Tweets per day value. We now have a percentage based area chart:

Second step is to encode total Tweets per day on the x-axis.

The treemap layout also has some interactions. By clicking on a day one can zoom in and see the relative mentions for each hashflag with more detail: 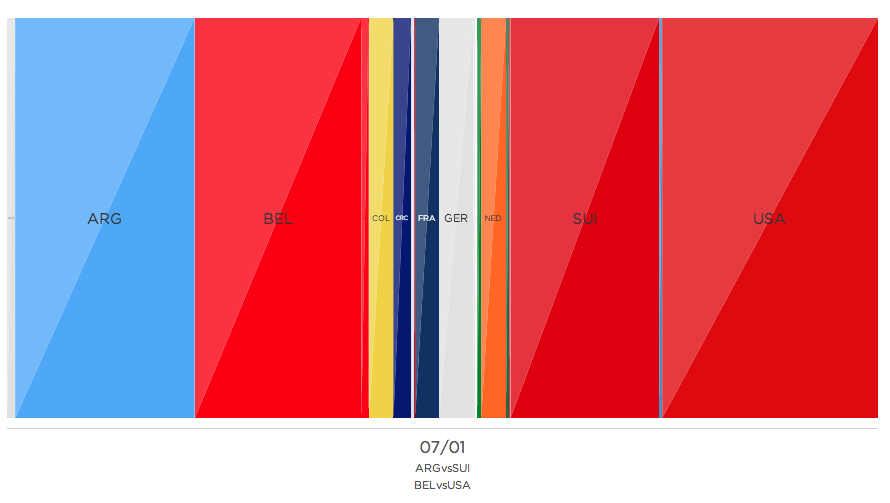 All in all it proved to be a nice exploratory tool to infer some of the findings I mentioned for the top visualization.